Turnaround is fair play! For years, American musical theatre goers have been singing, “I Don’t Understand the Parisiens”. Here’s the adorable Leslie Caron as Gigi:

Now, the Parisiens (or more generally, the French) are all “a-twitter” and asking “Pourquoi les Américains…”

I thought it would be fun (and hopefully not too depressing) to respond to some of their questions. So here goes…

Because a lot of the time, when we DO try and speak French, the French person we’re talking to just comes out with English…or the English person across the room takes care of it for us. I doubt a”minimum” of French would ever satisfy anyone for long anyway. If we’re not fluent in a year, we apparently have a motivation problem…so I’ve heard. I know for a fact my doctor was not impressed with my ability to say “merci” during my full-blown panic attack, which by the way, was precipitated by a French lesson. Truth is, we expect the French to be more worldly and know a bit of English. Think of it as a compliment.

I’m so glad you’ve asked this question, Gogo! Consider it a science experiment brought to you by the bastards of adulterated food, coming soon (and actually already having infiltrated) a French grocery store near you. But it isn’t too late. Fight to ensure your country remains free of Monsanto and sugar as an additive in everything. Stay away from the American slop known as soda pop, white bread, and processed burgers. It may actually be too late, though. I see a lot more fat people in the grocery stores these days, their carts piled high with Coke, chips, and American brand names only a fool could love…and a McDonald’s in every city.

Um…who the f&#* else were they going to vote for? McCain/Palin? Romney/Ryan? And hey, they’ve been smart enough to disassociate themselves from Carson. So it can’t be all about color, dude.

Hmm…could it be that the United States is five times the size of France? We have enough to see there! “Kings of the free world” is a bit confusing. Do free worlds have kings? We’ve never had a king! Hicks, though? We’ve got plenty of those!

Pourquoi les francais votent Le Pen? Because many people the world over are incredibly ignorant. Ignorance doesn’t have a nationality.

Ah, finally! A really important question and an intelligent suggestion. Maybe I’ll even try that tonight for a snack. Sounds yummy.

I have a question. Why don’t the French capitalize nationalities? 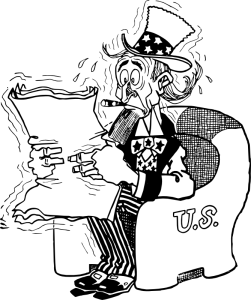 I’ve noticed that since moving to France, I often avoid telling people where I’m from. I say “Je parle anglais” and don’t bother to correct anyone who thinks I’m from England. It’s somehow easier that way. While there have been times when I’ve been proud to be the only American in the room (when everyone else in the room was British),  truth be told, more often than not, I am just embarrassed to admit it and hate it when I have no choice but to expose it. When someone, like a translator, is speaking on my behalf and loudly declares, “Elle est Americane”, I actually shrivel a little. Can’t I just be a citizen of the world?

It’s a shocking subtle touch of shame that I didn’t expect to feel here. I love America, and despite it sounding like a total contradiction, I am proud to be an American. It shouldn’t be that difficult to understand my mixed emotions given our history. When I consider what my forefathers hoped to build through the writing of The Constitution, I am proud. When I think of the way they failed to be inclusive of women and slaves, eh, not so much. When I think of the landing at Normandy during WWII, I am extremely proud. When I compare the ability to conduct business in the US with the way things are here, I’m proud to be an American.  But when I think of George Bush and Dick Cheney, I am completely mortified to be American. When I think of the way we bulldoze ourselves into other nations (including of course, our own) decimating the people, land and culture, I am deeply ashamed. When I compare our healthcare and educational systems, I am embarrassed. Of course, with all the latest political developments in the US right now, specifically the rise of Mr. #Drumpf (otherwise known as #Trump), I am beyond mortified.

I’ve also noticed that whenever I encounter one of my areas many Moroccan immigrants, I am at first afraid to be known as American. This has nothing to do with what one might expect…fear of them. On the contrary, I am afraid they will judge me based on my racist counterparts and the US media that spews so much anti-knowledge about the Muslim faith. This initial impulse wears off when I remember that I am perhaps the only American they will ever meet and have a chance to show them we are not all gun-toting, anti-Muslim idiots. But that nasty undercurrent of shame remains, I, a meager representative of an apology they will never hear.

Now, thanks to this wholly absurd and surreal political climate back home (it will always be home), I have to wonder if I will ever again cop to being American unless I have to. If America actually elects a narcissistic con-man like you know who, I think my nationality will remain a deeply-guarded secret revealed only in whispers.

I am happy to declare that my friends back home are completely same and rational people who abhor he who cannot be named again. Most Americans are. And all of us maintain the hope that this sad little man will be put in his place. But even if he is, the damage has perhaps been done. He’s already rallied and emboldened people too full of pain and ignorance to understand their anger. He himself is a silly man, a complete fool. It’s the people who seem to worship him and the absolutely insane beliefs for which he stands that make me shake for the Republic for which America was meant to stand.

For now, I tremble to be an American, and I weep for my country.